This idea originated with Bill Frayne and was passed to Jim McGroarty by John Davis. We all received Jim’s e-mail from September 21st. It concerns a year old, on-line petition requesting Ray Mabus, Secretary of the Navy to name a guided missile Destroyer (DDG 117) - or a subsequent DDG after Patrick Gallagher, USMC, a 23 year old Irish immigrant who was awarded the Navy Cross after heroism in the Vietnam War.

for service as set forth in the following Citation:

For extraordinary heroism as an ammunition carrier in a machine-gun Team with Company Hotel, Second Battalion, Fourth Marines, near Cam Lo, Republic of Vietnam, in the early morning of 18 July 1966.

Another enemy grenade followed and landed in the position between two of his comrades. Without hesitation, in a valiant act of self-sacrifice, Lance Corporal Gallagher threw himself upon the deadly grenade in order to absorb the explosion and save the lives of his comrades.

The other three Marines moved to safety while two other grenades landed in the position and exploded, miraculously injuring no one. Lance Corporal Gallagher's Squad Leader then ordered him to throw the grenade into the nearby river where it exploded upon hitting the water.

Through his extraordinary heroism and inspiring valor in the face of almost certain death, he saved his comrades from probable injury and possible loss of life. His daring actions were in keeping with the highest traditions of the Marine Corps and the United States Naval Service.

"It is a pleasure to pin this on your breast," said Gen William Westmoreland, commander of all US forces in Vietnam, at the awards ceremony there. It is said that Patrick was told at the time that the only reason the military authorities decided to award Patrick the Navy Cross, and not the US forces' highest honor the Congressional Medal of Honor, was that “the grenade had not exploded and killed him

Seven months after receiving the Navy’s second highest honor, Patrick was killed in Da Nang. Patrick was one of some 3,000 Irish immigrants who served in Vietnam and one of 29 who lost their lives there fighting for their adopted country. The petition’s goal was 18,250 signatures. After one year, they have 4,666 (about 25%.) As a Navy veteran and a destroyer sailor, this piqued my interest.

The original petition, as it appears on the website contained in Jim McGroarty’s e-mail, reads:

We, the undersigned, respectfully request that the Secretary of the Navy name DDG117, or a subsequent DDG class ship scheduled to be procured in 2017, after Corporal Patrick  Gallagher, USMC, (Navy Cross,) of Ballyhaunis, Co. Mayo, Ireland (Killed in Action,  Da Nang, 1967)

I found a similar petition on whitehouse.gov. marked “This petition has been archived because it did not meet the signature requirements.” (Not surprising-who goes to whitehouse.gov looking for petitions to sign?)

Upon further research, I discovered that on 23 May, 2013, over a year before the original petition was first circulated, Secretary Mabus had already named not only DDG117 after Paul Ignatius, former SECNAV under president Lyndon Johnson, but also DDG118 after Daniel Inouye, the late senator from Hawaii, and medal-of-honor recipient. On 13 March, 2015, Secretary Mabus also named DDG 119 after Delbert Black, the first Master Chief Petty Officer of the Navy.

The convention for naming ships of the DDG class has traditionally been to name them after Navy, Marine or Coast Guard heroes, and most of the 69 ships of this class have been so named. In fact, DDG 114 was named for Marine Ralph Johnson, a posthumous Medal of Honor recipient for heroism in Quan Duc, Vietnam. Likewise DDG 115 was named for Marine Rafael Peralta, a posthumous Navy Cross recipient for heroism during Operation Iraqi Freedom. Both Marines lost their lives shielding their fellow Marines from grenades, just as Lance Corporal Patrick Gallagher had done in Cam Lo, Vietnam on 18 July, 1966.

Since it appears that the petition in question is doomed as it stands, I thought it both a worthy and viable cause to pursue a new petition. There is no organization better suited to carry this petition forward than the Ancient Order of Hibernians. On the initial receipt of Jim’s e-mail, I drafted a new petition with attached signature pages. The form can be expanded to accommodate any number of signatures. Each numbered signature page carries a footer noting “Supported by AOH members, family and friends.” This expands the potential for more signatures. The good news is that the Navy plans to commission eight more DDGs, commencing in the year 2020.

After discovering that original petition had been archived, I changed the wording to the following:

We, the undersigned, respectfully request that the Secretary of the Navy assign the name of Corporal Patrick Gallagher, USMC, (Navy Cross,) of Ballyhaunis, Co.Mayo, Ireland (Killed in Action,  Da Nang 30 March, 1967) to one of the Guided Missile Destroyers (DDG 120 through DDG 127) scheduled to be to be commissioned in 2020 and beyond.

The proposal goes like this: Every member takes one or more signature pages and a copy of the petition page to show the signers what they are endorsing. When the signature page(s) are full, they return them to me in an envelope provided. The effort is asking forty-one other people to sign a petition and the postage required to return the signed petitions to me. After the 2016 elections, I will mail the original signed petitions to the SECNAV, with copies to Sen. Casey, Senator Toomey (or his successor,) the new District 8 representative, and Senators Wicker and Hirono, the chairman and ranking member, respectively of the Senate Armed Services Committee, subcommittee on Naval Policy.

I have a contact – a retired Commander, USN and family friend who is currently working for Admiral John Richardson, Chief of Naval Operations. I will be seeking his support and advice in moving this petition forward.)

Our thanks to brothers Bill Frayne, John Davis and Jim McGroarty for bringing this campaign to our attention.

Mr. President, I move that AOH Division 3 support the gathering of signatures for this petition and that we contact our brothers in surrounding divisions to join us in this endeavor.This idea originated with Bill Frayne and was passed to Jim McGroarty by John Davis. We all received Jim’s e-mail from September 21st. It concerns a year old, on-line petition requesting Ray Mabus, Secretary of the Navy to name a guided missile Destroyer (DDG 117) - or a subsequent DDG after Patrick Gallagher, USMC, a 23 year old Irish immigrant who was awarded the Navy Cross after heroism in the Vietnam War.

Thanks to all our AOH Brothers who helped organize this well deserved honor, especially brother Bill Bryson who communicated with the contacts in Texas and Ireland. 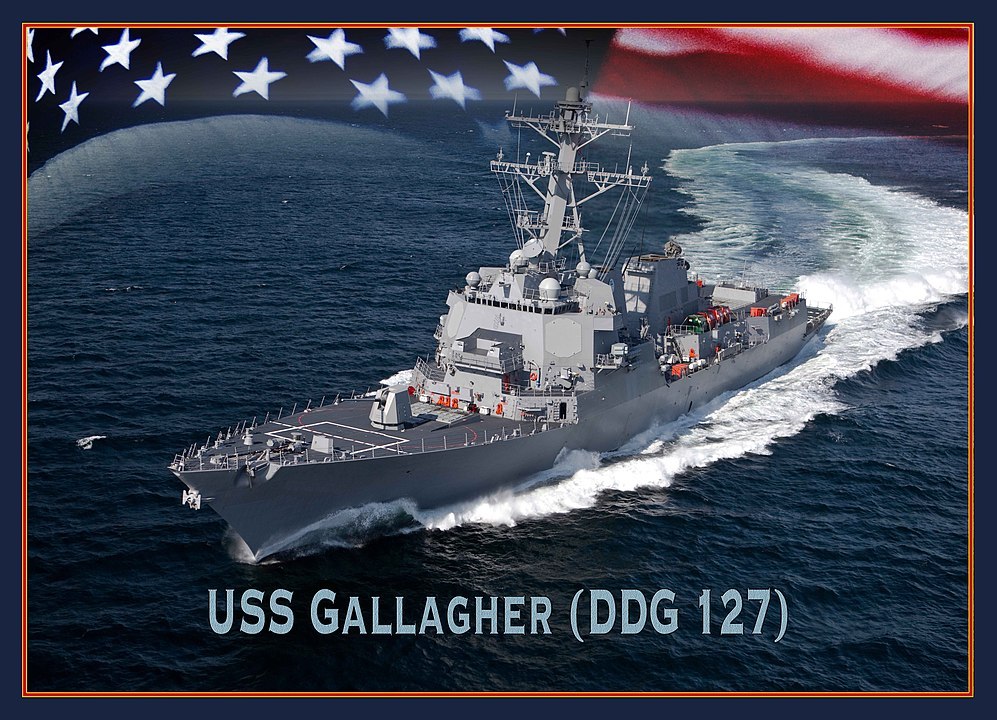